Exquisite Splanch featuring breath taking foyer which leads to formal dining room, modern eat in Kitchen, family room, and half bath on first floor from where you also ha...

Welcome to this beautiful Hi Ranch located on a quiet cul-de-sac in Baldwin. This house has 2 floors of spacious living area. First floor has 2 Bedrooms, 1 full bath on f...

Beautiful Single Family, Close to all transportation LIRR, Supermarkets, pharmacy, schools. **All Information Deemed Reliable, Must Be Re-Verified By Purchaser(s)**

Don't be mislead and miss this 3 bedroom home in desirable Plaza school. Huge eat in kitchen with island and two sets of sliders to fenced yard make this home perfect for...

Your next home! All redone with new kitchen and baths! Attached garage, full finished basement, spacious rooms! Enjoy this comfortable layout for years to come! This home...

THIS IS A BEAUTIFUL HOME .JUST BRING YOUR BAGS AND UNPACK ,THAT'S ALL YOU NEED TO DO. KITCHEN WAS TASTEFULLY REMODELED TWO MONTHS AGO, BOTH BATHROOMS HAVE BEEN UPDATED WI...

Sandy damaged property in need of full renovation, FEMA compliant lift and bulkhead repair; the purchase of this property comes with APPROVED plans from the ZBA of Hempst...

Sandy damaged property in need of full renovation, FEMA compliant lift and bulkhead repair; the purchase of this property comes with APPROVED plans from the ZBA of Hempst...

Information Copyright 2016, Multiple Listing Service of Long Island, Inc. All Rights Reserved. The source of the displayed data is either the property owner or public record provided by non-governmental third parties. It is believed to be reliable but not guaranteed. This information is provided exclusively for consumers’ personal, non-commercial use. The data relating to real estate for sale on this web site comes in part from the Broker Reciprocity Program of the Multiple Listing Service of Long Island, Inc.

Baldwin is a community in the Town of Hempstead, New York that provides residents with some of Long Island’s best suburban living. Baldwin is a great place for families and commuters. The community is known for friendly parks, nationally recognized schools, and friendly residents. The hamlet is a wonderful place to raise children, with a large number of families residing here and taking advantage of all that Baldwin has to offer.

A number of different neighborhoods in Baldwin provide for single-family homes in a variety of architectural styles. The real estate market in Baldwin is also known for its condominiums and co-ops, which provide a great living option for both young and old residents coming to the area. For any desire within a wide range of housing preferences, Baldwin has something that will fit what you need and what you want.

There are a number of public parks in Baldwin, with plenty of room for residents young and old to enjoy the outdoors. Baldwin Park is a home to an impressive range of recreational facilities, including basketball and tennis courts, soccer fields, playgrounds, and bike paths. Silver Lake Park and Milburn Pond Park are some the area’s more passive parks, offering green spaces to enjoy without as an expansive range of activities.

Grand Avenue is the community’s small, but pleasant, shopping district with a collection of local and chain stores. Large chains in the area like Waldbaum’s, Best Buy, Walgreens, and Petco also provide for all of your family’s daily necessities. The community is also making an active effort to draw new, local businesses to the area. For further shopping needs, the largest regional shopping mall on Long Island, the Roosevelt Field Mall, is just a short drive away.

Baldwin is home to a station on the Babylon Branch of the Long Island Rail Road, making commuting to city convenient. The JFK International Airport is also less than half an hour’s drive away, for traveling around the country and beyond. New York City is known for its public transportation and commuters, living away from the hustle in a neighborhood like Baldwin does not force residents to sacrifice the convenience.

Residents of Baldwin are served by the Baldwin Union Free School District. The district is known for being one of Nassau's highest performing public school systems. The local high school, Baldwin Senior High School, is recognized nationally as a School of Excellence. Baldwin is also home to one Catholic school, St. Christopher’s, which is known for student participation in a number of both Catholic and Baldwin community events.

Baldwin is known for many things, a school district recognized for its high performance, a convenient location and transportation, and public parks filled with opportunities for recreation. The community is a wonderful place to raise children or a enjoy life away from the busyness of the city.  For families, young commuters, and everyone in between, Baldwin can be a wonderful community to live in. 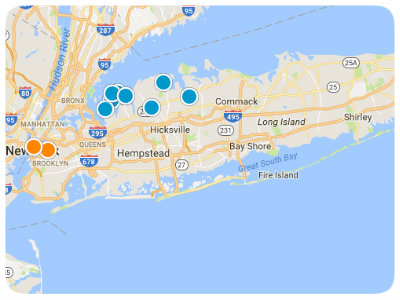